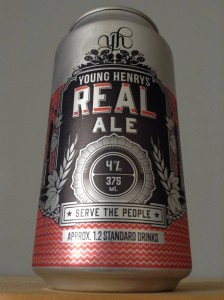 “The Real Ale is our take on a traditional Best Bitter. In other words, where British style meets Australian tastes. We start with a 50/50 blend of English and Australian malts then add three of our favourite varieties of Aussie hops; Topaz, Galaxy and Ella. This gives a New World kick to an Old World classic. Thanks to some lingering sweet toffee and caramel flavours, the Real Ale packs loads of flavour into a 4% beer. So much so that we were invited to the UK for the 2014 International Real Ale Festival and were incredibly honoured to see this beer pick up the Gold medal, matching it with some big hitters from the home of Best Bitters.”

Served in an English pint. Slightly hazy deep amber complexion with a short head topping it off. Good retention though, allowing a wavy lace to stick to the glass as we imbibe.
Quite a simple aroma, but very effective. It obviously focusses on the sweet bready malt with caramel meeting the floral and earthy hops. Some jammy characters in here, marmalade and apricot come forward with a nice toasty note working in. Something candy-ish in here that we just can’t put our finger on. Toffee apple maybe? Either way it’s a nice touch.
Super smooth in the mouth. Creamy texture, mild Co2 and a very gentle bitterness. Just 4% ABV as well so session ability is what it seems the brewers are going for here.
The flavour backs up with a big impression of white bread, caramel, earthy hop and light florals. Somewhat of a nutty middle makes way for a super smooth finish which reveals biscuity malt, subtle herbs and dough on the back end.
We can now see how this ale picked up a gold medal in the UK real ale festival, it’s about as traditional as you can get. Wouldn’t be surprised if we saw this pouring right next to a tap of London Pride in any classic English pub.