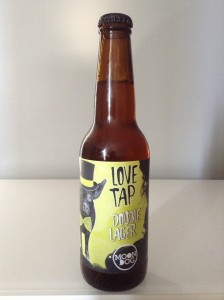 “The equivalent of drinking fresh hop goo, goo that’s an amalgam of German, Aussie and Kiwi hops, an amalgam in which the New World hops carry out an almighty smackdown on the Old World, a smackdown in which, despite the seemingly huge amount of hops packed into the beer, the result is a smooth, bitter-without-being-beastly, hazy golden beer with bucketloads of fresh tropical aromas, a hazy golden beer that you’d swear was never 7.1 per cent. Yet it is. And it turns out it’s a lager too – a double lager, apparently – and we’d wager they’ll be making more of it soon. Just give the pig a monocle and feather in his cap and we’ll call it quits, guys.”

This brewery from Melbourne is known for brewing some pretty whacky beers, but by saying that they are all really characteristic. We love the creativity these guys put in to every one of their beers. served in a shaker glass the hazy amber pour produced a big 2 finger white head that retains well. Thick, blotchy lacing is omitted all the way down the glass. Very ale-like nose with big citric overtones. New world hop aromas of pineapple, grapefruit, aniseed and pine are nicely balanced by the intermittent old world, vinous wafts of herbs and lemon. Some honey-like pilsner malts also come through. In the mouth it feels frothy with lively carbonation. Medium-full bodied. Quite bitter up front, which develops into an assertive hop dryness before the malt base takes the edge off. Lovely notes of passion fruit, grapefruit and pine In the mid palate deliver a crisp herbaceous finish. Good length. The 5.9% ABV we think is a fitting tip of the hat to the new world aspect of this craft lager. Huge respect for these guys, they’re in our top 5 best Aussie breweries for a reason.