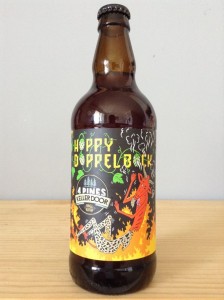 “Once brewed with a holy purpose, this beer packs a punch so strong that Beelzebub himself drops to the floor and quivers at the mere sight of it. This double-down deal with the devil crams in so much super-rich Munich malt flavour it can sustain a monk through months of fasting, and enough contemporary hops to smother the hot fires of Hades. The monks of old believed that liquid cleansed the body and the soul. Amen brothers and sisters, redemption is here.”

We dusted off the old Stein glass for this drop. She presents an attractive crimson complexion with stunning clarity. Just a short head forming on top which recoils to a fine sheet and minimal lace. Our first observation of the aroma is this sharp piney hop note that cuts through these sweet and sticky malts. Kind of has that red IPA character to it with its nicely balanced hop to malt ratio. We certainly detect a good heady dose of tropical stone fruit but as quick as our olfactory’s pick it up and injection of caramelized toasty malts and toffee move on to balance it out. An ingratiating aroma. Really smooth mouth feel, the malts provide a silky texture initially before the 40 IBU introduces a mild hop bitterness. Mild-medium in body with an incredibly well hidden ABV of 7.5%. A surprisingly approachable number thus far. Taste wise we get a hop forward blend of citrus and pine the work in to the toasty and sweet malt base upfront. The bitterness begins to ramp up in the middle as it takes on a somewhat resinous approach. The sweet malts return for a short cameo just before the well drawn out bitterness in the finish. Ultimately it’s a very well brewed beer. The balance on the nose doesn’t carry through to the flavour as much as we’d hoped as the hops do dominate a bit too much for a doppelbock. Aside from that it’s a fun, tasty and enjoyable beer.