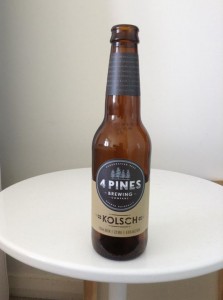 If we were in Cologne we’d be asking for the traditional glassware, which would be a tumbler, but unfortunately we don’t have that luxury so this we served in a shaker glass. The translucent straw-gold pour produced a snow white one and a half finger head that eventually settles to a light covering over the top. Average lacing. Off the nose we’re getting dominant grainy wafts of cereal malts, oats, spice, a touch of honey and toast. A subtle dash of citrus and herbs liven it up a little but the pale and wheat malts take center stage. Mouth feel is smooth and airy with mild-medium carbonation. Very light on. Slightly watery upfront as the flavour seems to slide right off the tongue. Gentle grains and a hint of corny DMS in the mid-palate are complimented by a mildly bitter finish. Some dryness on the tongue along with a light, fruity back end does somewhat display mediocre length. 4.6% ABV is about the standard for Kölsch. Look, it’s not a German Kolsch but it certainly goes down very easily. A good session beer.