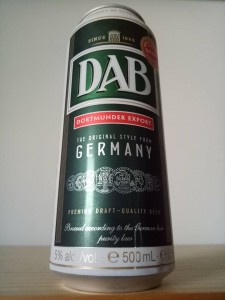 “Following the introduction of the bottom-fermented brewing process in the mid-19th century, a new beer type became popular and shaped the consumption habits of beer drinkers. The fresh, pale brew with its mildly hoppy flavour became one of the star products of its age. That is why Dortmunder style is considered a milestone in the development of beer culture in the world and became a synonym for superior quality.”

Appearance: Bright golden colour with 100% transparency. Nice big three finger head that retains brilliantly and decorates the sides of the glass as it ebbs.

Aroma: Classic pilsener nose, good uplift from the hops actually, getting a good nose full of Hallertau and Perle character – spicy, herbaceous and earthy with a suggestion of light florals. Clean and sturdy malt backing of rice crackers, sourdough and cereal. Simple but well structured.

Flavour: Rather dry, husky and earthy with a spicy accent upfront. Picking up a bit of grassy/herbal hop through the mid. Grainy cereal malts tailing in late as it delivers a crisp and slightly drying finish with more herbal hop/botanicals on the rear.

Mouthfeel: Fuller than most pilseners but still kept somewhat clean and crisp. Co2 is a tad flat and the 5% ABV is moderate.

Overall: Getting quite generic here but traditional European pilsners have been hitting the spot this summer. This one…. Hhmm…so so. It wouldn’t stack up against better German pilseners but it still offers some nice conventional qualities. Not bad.