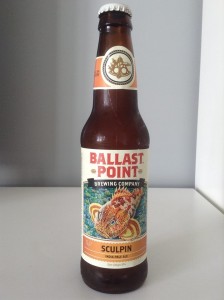 “Our Sculpin IPA is a great example of what got us into brewing in the first place. After years of experimenting, we knew hopping an ale at five separate stages would produce something special. The result ended up being this gold-medal winning IPA, whose inspired use of hops creates hints of apricot, peach, mango and lemon flavors, but still packs a bit of a sting, just like a Sculpin fish.”

We love a brewery that loves to brew big, hoppy IPA’s. Very similar to their ‘big eye’ IPA so we’ll see which one takes the cake. Served in an IPA glass the ever so slightly hazy golden pour produced a two and a half finger white head that stays. Some lacing evident. The aroma boasts big tropical and stone fruits. Peach, mango, pineapple and orange definitely stand out the most. Hints of rye, white pepper and biscuit malt pull the big fruity notes back to balance out a vibrant and refreshing nose. The mouth feel was quite frothy with medium carbonation. We don’t know the IBU level but our guesses would be up near the 80-90 mark. Quite a bitter back palate, though in saying that the fruity fore flavours and subtle biscuit malt gives the palate flowing consistency through the mid to the bitter, grassy finish. The 7% ABV does leave a nice little sting but considering the level it doesn’t overpower. Essentially this is a very good example of a west coast IPA. Big on hops, bitterness and citrus and big on character and drinkability. A solid offering.