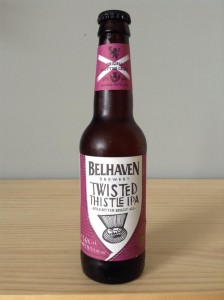 “A stunning India Pale Ale (IPA), don’t think that Belhaven’s Twisted Thistle has anything jaggy, spikey, prickly or otherwise pain-inflicting in its nature. Quite the opposite. Your taste buds will tingle with pleasure after a sip or two of this golden nectar. A real treat from our master brewers in Dunbar.”

Served in an IPA glass. It pours to a bright amber hue that’s as clear as day. A compacted one finger head is knocked up before it retreats to a thin sheet over the top. Laced reasonably well considering the lack of head retention. As she’s a Scottish IPA it could either go one of two ways, either they take on the new world American IPA like Brewdog or they take after a traditional English-style IPA like most British breweries. Unfortunately it’s the latter. On the nose it’s very malt-forward with the dominant scents being caramel, toffee, earthy hops, honeyed malts, toast, stewed apples, light florals and a touch of zesty orange. Quite a lot of character but our main gripe is that the brewers have called this an American IPA when clearly it’s an English IPA. With thanks to the heavy use of malts, the mouth feel is silky smooth with only a lick of bitterness developing on the back end. Co2 is mild and the body is mild-medium with a well concealed ABV (5.6%). Upfront it’s earthy with nutty malts, sweet caramel and toffee overriding any trace of American IPA-like features. We can get a soft floral note that moves through the mid, picking up a syrupy/honey flavour with it. Finishes malty sweet with a very mild bitterness. Disappointing. Although we really didn’t hold much hope considering around 80% of British breweries have no idea how to brew an American IPA. Honestly all it tastes like is a hoppy version of the hobgoblin. Next!