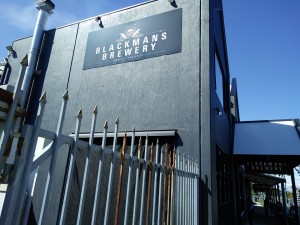 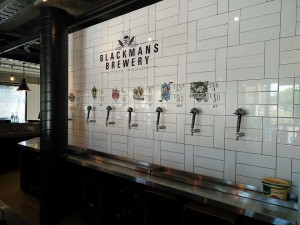 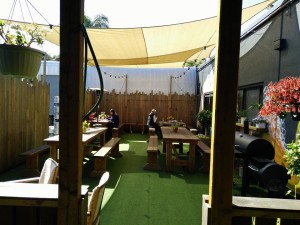 Our third stop on our Victorian brewery pilgrimage took us to Blackmans Brewery. After almost two full tanks of petrol, well over a thousand kilometers and every topic of conversation exhausted we reached the lovely little regional beach side suburb of Torquay – known by some as Australia’s surf capital. Too bad neither of us surf as there are some well known beaches in close proximity such as Bells Beach and Jan Juc that hold huge events like the Rip Curl Pro and the Bells Beach Surf Classic. But the surf isn’t what we came for, we came for beer and although craft beer isn’t exactly overflowing in Torquay their one and only craft brewery more than makes up for it! Set down the southern end of the Esplanade the brewery sits at 26 Bell Street with an eye catching street presence. Inside the balance between modern and industrial furniture carries through to the super cool little beer garden out the back. Astro turf lines the floor as a rustic wooden fence hems it in. A few long wooden bench tops get drenched in the early afternoon sun and are perfect to sit on, get through a paddle and take in the grungy graffiti-like art on the adjacent wall. Not only does this joint have a really relaxed and comfortable vibe the range of beers is respectable and cleverly themed – each beer is named and matched to a personality of someone in the family who run the brewery. Bob the Witbier was first cab off the rank, he was a Belgian style witbier with typical clove, spice, citrus rind and banana on the nose. A fresh herbal palate, light and zesty in flavour. A pleasant way to start. The unfiltered Lager is the only one unnamed but presents a crisp and refreshing hop aroma with a subtle malt backing. It’s light on, sessional and slightly citrusy and finishes with a mild bitterness. Ernie the Golden Ale has a floral hop aroma with a dash of citrus and a clean pale malt spine. Super smooth with a nice bitterness, lovely fruity hops on the tongue. Drinks like a Pale Ale. Good drop. Reginald is the IPA and he’s pretty much like Ernie (the Golden Ale) but on steroids. We don’t do cider (sorry Winnie) so we moved straight on to their first seasonal which is an award winning Pale Ale. It was punchy with a hop forward nose. Kiwifruit, honeydew and mango balance out by a bold caramel malt sweetness on the nose. Candied fruits, sweet malts and a crisp mouth feel make this a pleasure to drink. Their second seasonal was angry Reg – a big, sharp, piney, resinous and bitter Double IPA. Creamy texture, slightly peppery, full bodied, hop charged and finished with a fruity palate. Brilliant DIPA. Their best brew. So whether you make the trek for the beer, the surf, exploring the great Ocean Road or even just for a relaxing beach side getaway a visit to Blackmans Brewery should be squarely in your sights!