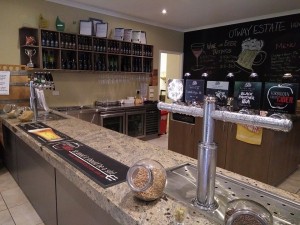 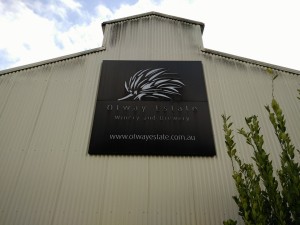 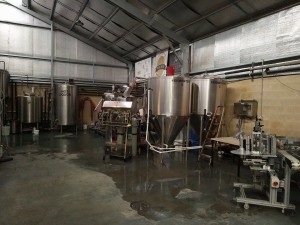 As far as winery/brewery operations go Prickly Moses aka Otway Estate would have to be one of the most respected and recognised in Australia. The brewery, which is named after the native wattle (not a cute little pet echidna as one would hope!) hit the market with their Pilsner & Wheat beer in 2007 and from there they’ve literally gone from strength to strength – even to the point where just recently the directors have partnered up with the Queenscliff Brewhouse (formerly the Espy in Queenscliff), as well as the Great Ocean Road Brewhouse in Apollo Bay to expand their delicious craft in to other corners of the region. The vineyard itself is set on 32 acres with 15 acres under vine. The vineyard also offers on site accommodation in gorgeous little cottages which we booked for the night. We dropped our bags off and made a bee line for the tasting room where Jude, our super friendly and very helpful host for the afternoon, was waiting for us. Inside the cellar door it’s small and quite personal with a few stools lining the bar. Ten taps are on offer – nine pouring their beers and one for their forbidden fruit cider. The range has a great balance of light and dark beers starting with the Summer ale which is crisp and clean with tropical fruity hops and a light, dry finish. The Spotted Ale is their version of a Golden Ale and it’s similar to the Summer ale with a more pronounced malt sweetness in aroma and flavour. Very sessional. We then moved on to the organic Pilsner which is a new world interpretation offering crisp, herbal aromas and a clean bitter finish. Great beer. The ‘chainsaw’ is their Aussie wheat beer which only has 50% malted wheat so hints of banana and subtle spice are well balanced by the fruity Ella hops. Again, clean and sessional. Their flag ship Otway Pale Ale is brewed in the English style with sweet nutty malts and earthy hops on the nose. Like all their beers so far (surely an ode to the use of pure Otway rain water) the palate is smooth, crisp and super clean with a nice balance between sweet malts and earthy/spicy hops. Their Red Ale is another one of their well known beers, it’s a malt-forward Irish style brew held up with good body and a smooth finish. Their Otway Stout is a pleasant and approachable beer with mild roast and sweet toffee notes that finishes malty and little dry. The Chardonnay IPA is the first of their seasonal beers and it is as it sounds – roughly 75 litres of chardonnay to a 1000 litre tank adds an extra fruit complexity with an assertive bitterness to round it out. Their Farmhouse Ale is a welcome taste changer on the palate with its rich malt sweetness, zesty lemon and lifted spice aromas. Smooth palate with slight dryness and a soft alcohol warmth in the tail. Very nice. The Black Panther IBA is a big, complex, full bodied and roasted brew with a superb balance of Piney American hops. Probably our pick of the beers. We finished on the Black Stallion Imperial Stout which was potent and decadent and would pair beautifully with a big steak and a roaring fire in the cooler months. They have also taken dog-friendly to new heights with their very own release of a “beer for dogs” (don’t worry it’s 0% ABV) which gives new meaning to having a few beers with your mates! They fill growlers and there’s also stacks of other merchandise such as labelled glassware, bar mats and gift packs for sale so it’s hard to leave empty handed. Just be aware of one thing, the cellar door is only open Friday-Sunday so don’t almost make the mistake of making the trip from Sydney only to find out it’s not open. Yes, we’ll admit that was us!