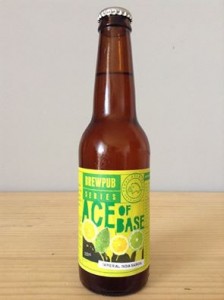 “When we managed to get our hands on some Sorachi Ace hops we certainly saw the sign and were inspired to pull this golden oldie out from our back catalogue. Ace of Base is brewed to showcase Sorachi Ace hops which deliver a front of stage citrus explosion, in perfect rhythm with a dry and assertive bitterness out back, leaving a delicious resinous hop mouthfeel that’s off the charts.”

Served in a wide rimmed tulip. She pours a cloudy golden hue with a fizzy two finger cap over the top. The head gradually reduces and establishes a fine film with some scattered patches of lace left in its wake. The aroma packs a lot of sorachi citrus punch initially. Plenty of lemon and lime as the label suggests. This certainly adds to the apparent tartness which gives the aroma it’s funky character. More subtle suggestions of orange and pineapple come through as undertones of coriander leaves and white pepper rounds it all out. Really fresh and snappy on the nose. The mouth feel is frothy, slightly sharp and dry in the finish. The Co2 provides a pleasant tingling sensation while an assertive bitterness penetrates upfront but planes in to the swallow. In flavour the citrus notes come on a bit sharper as opposed to the creamier and almost sorbet-like texture it offers on the nose. We’re sure that the 8.3% ABV definitely plays a considerable role in that. Subtle notes of peppery spice strengthen the alcohol burn as bold herbaceous notes introduce a prickly, grassy and ultimately dry and bitter finish. We’re a little split between the aroma and flavour here. The nose presented some really aromatic qualities whereas the the palate was slightly unbalanced and seemed to favour the booze a bit too much. In saying that the sorachi ace hops shone through and featured well throughout the beer. Some pros and cons but essentially it’s fun, summery and quite easy to put back. Not bad.