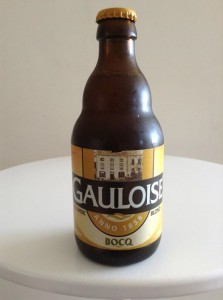 The Gauloise was the first beer brewed by the Brasserie du Bocq in 1858. At the time, Martin Belot, the brewery’s founder drew his inspiration from the many Gallo-Roman sites in the region to create an authentic beer representative of Gallic brewing know-how: The “Gauloise”. Gauloise – pronounced ‘gol waz’ – or Gallic in English has a few meanings. There is a connection to Celtic people that lived in Gaul, which is now known as a region of Northern France and Belgium. Ok, enough history now on with the review.

Served in a beer tulip. The bright golden appearance reveals heavy suspended sediment when held against the light. Very active carbonation, streams of bubbles rise up to form the fizzy one finger head which steadily reduced to a thick halo around the edges of the glass. Reasonable lacing. Plenty of apple cider and fresh pear aromas emanating initially. Maybe just a slight hint of vanilla bean too. A very subtle touch of coriander creeps in as honey, grainy malts and doughy white bread fill it out. All very restrained but there to be enjoyed. In the mouth its silky smooth with moderate carbonation. Well weighted too, producing a creamy texture that coats the palate nicely. Minimal grip. The fore-flavour offers a doughy mix of bread and grains with a mild honey-like sweetness. As this carries forward a subtle note of coriander develops, leading on to the malty, yeasty finish. As it draws out it does become a little sweet, not enough to be cloying but the exit could have done with a bit more balance. A bit of a shame about the level of sediment too, it was so thick we couldn’t finish off the remainder of the beer. Not a bad Blond by any standard but we certainly have had better.