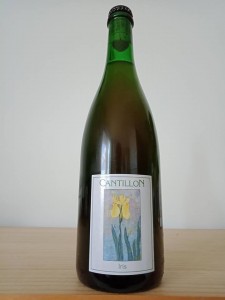 Appearance: Slightly hazy amber with a cm of finely beaded foam perched on top. The head fades to a wispy film which leaves a wet lace drag as it ebbs.

Aroma: Dry, musty and a little spicy. A fair bit of acetic lemon, candied citrus, unripened stonefruit, apricot and woody oak tannins balanced by slightly earthy funk and subtle caramel sweetness. Picking up a very unique scent of cheese and crackers…we say unique because somehow it incorporates both! Hops are rather herbal and certainly coming through a lot more than previous Cantillon beers we’ve had.

Flavour: Again quite dry and musty, acetic and grainy with a hint of alcohol warmth coming through. White grape juice, woody oak, barnyard funk and peppery spice moving in to bitter grapefruit, lemon peel and green apple late in the piece. The finish is dry, herbal and woody with excellent length on the rear.

Mouthfeel: Crisp and drying but much smoother than previous styles. Moderate co2 with a slightly higher and more pronounced AbV (6.5%). Medium acidity.

Overall: Easily the driest and most hoppy beer we’ve had from Cantillon. This could certainly have something to do with its maturity though – it was bottled this year and could do with some aging. That said though it’s still a highly enjoyable, balanced and refreshing drop.