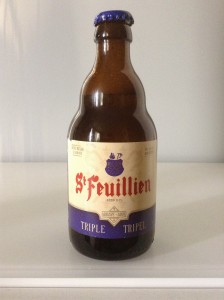 “Since 1873, the Friart family has been brewing various beers, among others, the St-Feuillien. But the history of this beer goes back even further. In the 7th century, an Irish monk by the name of Feuillien came to the Continent to preach the Gospel. Unfortunately, in 655, while travelling through the charcoal forest, across the territory of what is now the town of Le Roeulx, Feuillien was martyred and beheaded. On the site of his martyrdom, Feuillien’s disciples erected a chapel which, in 1125 became the Abbey of Prémontrés, but later became known as the Abbaye St-Feuillien du Roeulx. The Abbey prospered until the upheavals of the French Revolution. During these troubled times, it was condemned by the revolutionaries. For centuries, monks have brewed beer and this tradition has been preserved until this very day. Fourth generation of brewers for the Friart family but still the same passion and know-how”.

Served in to a snifter. The slightly hazy golden pour is alive with active carbonation and fine suspended sediments. The heads swells to just over two fingers in height before peeling off about 1cm and retaining. Healthy lace trails are being omitted. What we first like about this aroma is this unique scent of spicy dried tea leaves that is really well blended in to the distinctively Belgian wafts of pear, vanilla, banana lollies, clove and honey. A few deeper sniffs and undertones of black pepper and stone fruits are uncovered. It’s refreshing to smell a Tripel with a slight twist to it. In the mouth it’s light and frothy with medium-high Co2 levels. It’s amazing how these Belgians brew beers so heavy in ABV (this particular one is 8.5%) but manage to keep them so smooth. Upfront we get a honeyed lemon sweetness which is offset by a muted peppery spice and that lovely herbal tea leaf we were talking about in the aroma. The ABV drops in around the mid but it’s well contained as it gradually progresses in to spicy notes and eventually on to a yeasty finish with lingering notes of banana and bready malts. Damn good Tripel. This is actually our first crack at this breweries range and to be honest we’re more than impressed. The base aromas and flavours are there, the high ABV is well disguised and that beautiful injection of spicy tea leaf really finished it off for us. Very nice, we will certainly be keeping an eye out for more of this breweries beers.