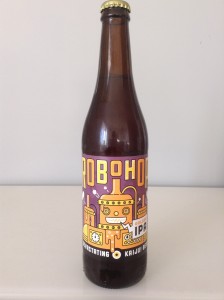 This trio from Prahran, Victoria have certainly stamped their mark on the Australian craft beer scene of late. At the same time, impressing us more and more each time we try one of their beers. Their website also outlines the hoops they had to jump through before they could launch, as their initial name – Monster mash – was picked up by a certain energy drink company and threatened with legal action because it was too similar to theirs. Boo fu*%ing hoo we say! So this humble little trio settled on the name Kaiju which, in Japanese, means “Strange creature”. Hey, we like that better anyway.

Served in to an IPA glass. The relatively clear amber pour forms a modest 1 finger cap. The head is retained well but does reduce slightly, eventually settling to a firm covering over the top. Laced well. We can definitely say one thing for sure, it’s not so aggressively hopped as all of the other IPA’s we’ve tried but there is still a plethora of aromatics on offer. Tropical fruits stand out for us. We get firm wafts of grapefruit, lychee, pine apple, passion fruit and citrus. We get a subtle dusty scent as well, similar to wood shavings. Undertones of marmalade and honey bring up the bottom end while a decent caramel backing acts for the malt. Very well-rounded on the nose. In the mouth it has a slick texture with a well weighted feel. The bitterness is quite delicate, providing a little tickle on the tongue. The palate is similar to the aroma in terms of fruits but it takes on more stone fruit than tropical. Flavours of rock melon and paw paw come to mind as a slight pithy astringency is boosted by a mild hop dryness through the mid. Slightly bitter citrus fruits are developed late before a dry finish rounds it all off. Only 5.7% ABV, so this could be viewed as tame by Kaiju’s standards. Well we can see what they’re going for here – a sessional IPA with lower ABV, less aggressive bitterness but still enough flavour to keep it crafty. Once again these guys have pulled it off with near perfection. Excellent beer.