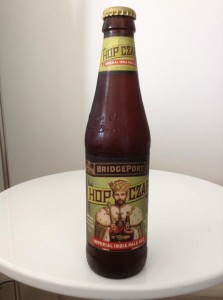 “Long live the king.
The original king of hops has regained his throne. Hop Czar’s original is brewed with an irresponsible amount of hops and balanced by a robust malt backbone. Bridgeport revolutionized the IPA style and this Imperial India Pale Ale is a worthy bloodline to our award-winning heritage”.

Quite a different IIPA here. Served in an IPA glass the clear amber pour produced a fingers worth of head with reasonably good retention. Laced well. This aroma is far from your usual Imperial IPA as it’s mainly malt-driven with sweet wafts of grape, bubblegum, caramel, tangerine, pine resin and some earthy notes to boot. Similar to an English-style IPA. In the mouth it’s full and rounded with mild carbonation and medium body. Slightly hoppy upfront, with sweet earthy undertones. Sweet malts, caramel and dough are overtaken by the lengthy hop bitterness which lingers with a strange subtle spiciness on the back end of the palate. The flavour definitely packs more hoppy punch than the aroma. The 7.5% ABV is well hidden among the array of earthy flavours. Imperial IPA? Could have fooled us, drinks more like a standard or a double IPA at best. Still, not too bad.