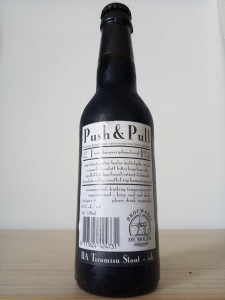 Served in a snifter. Pouring blacker than the ace of spades. It builds a finger of brown head that holds its shape well, gradually receding to a fine overlay that deposits a spotty lace down the sides of the glass.
Not too sure if we’re digging this aroma. It’s really medicinal, brimming with cherry sherbet, plum jam, marzipan, icing sugar, some bourbon sweetness and a strange hint of citronella. Kind of questioning if we got given the right bottle here?! Maybe a hint of vanilla too but Tiramisu? Gotta be kidding.it smells like benadryl. This isn’t the De Molen we’re used to that’s for sure.
We’ll admit, they’ve saved themselves flavour-wise. That unsavoury medicinal character is much less pronounced and replaced by a bold whisky sweetness and slightly tart cherry notes. Still no Tiramisu though, a victim of the barrel aging process perhaps? Some marzipan and a hint of roasted nutty malt develops before a sweet and somewhat fruity finish reveals light milk chocolate notes on the rear.
They have struggled to shake the medicinal texture though – quite direct and a bit oily. To their credit they’ve hidden the booze (10.5%) well. Medium body and co2.
De Molen…we’re not angry, just disappointed! We’ve reviewed about a dozen of their beers and this one could possibly sit at the bottom. We don’t mean to harp on about this medicinal note but it really impedes on some of the more enjoyable flavours. And where’s the Tiramisu? It’s non existent. Looks like they’re human after all!