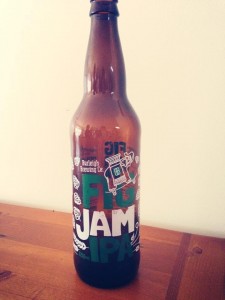 “A couple of centuries back, IPA was made strong and hoppy to protect it on those long voyages from England to India. These days, we just make it that way because it tastes great. An intensive five-stage hopping process delivers a rich, robust character, smooth flavour and an inviting aroma. So, while it has all the mighty ‘BAM’ of the original, it’s surprisingly well balanced – a bit like our skateboarding elephant.”

Somewhat seen as the front runner of Gold coast craft breweries. Poured into an IPA glass the appearance displays a clear gold with a tight 1 finger head that fades slowly. Retention wasn’t great but in saying that it was quite persistent, allowing some nice lacing to be strewn down the glass. Aroma has a sharp resinous pine-driven nose. A gorgeous addition of lychee and pineapple with a hint of marmalade makes for a delicious aroma. Medium carbonation with an evident assertive bitterness (70 IBU). Silky mouth feel with a touch of dryness. Got plenty of citrus and pine initially, some orange peel and a touch of grapefruit also come through. The mid-palate continues with the fruit driven flavours, but a small shift sees less citrus and more stone fruit flavours such as mango and peach come through. A well-rounded citrus finish caps off a highly fruit driven and highly palatable IPA. The 7% ABV is nicely hidden and adds extra body to this tasty beer. Big ups to Burleigh Heads here, nice brew lads.