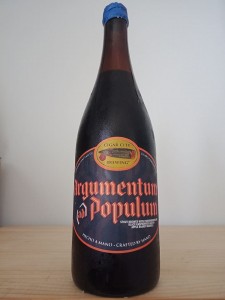 “If many believe it, it must be so.” That’s the succinct way to describe argumentum ad populum, an argumentative fallacy found often in both classical logic discussions and internet beer forums. Being amateur classicists ourselves, we at Cigar City Brewing avoid fueling fallacious arguments about anything, be it epistemology, idealism or barrel-aged beer. We present this apple brandy barrel-aged stout brewed with marionberries and black raspberries as a liquid monument to the dangers of fallacious arguments, both online and off.”

Appearance: Ominously black with a loosely held overlay. It forms a ring and struggles to produce any real lacing.

Aroma: The prominent scents are rich and intense – molasses, leather, espresso, dark fruits, plum, brandy and musky vanilla. One of our pet hates in a stout is acetaldehyde (usually a green apple/pear note) and these guys have flirted with danger by aging stout in apple brandy barrels but it just works! The soft fleshy tones of the apple brandy marry up with the roasty malt base beautifully! Trust!

Flavour: This unique fusion of berries, apple brandy and hedonistic imperial stout is just to die for. Sweet brandy and ever so slightly tart berries cut through the roasty, dark coffee flavours like butter. Something best described as cherry, oak, vanilla and treacle delivers a warm finish with a heavy roast, dark fruits and touches of the apple brandy barrels.

Mouthfeel: Velvety smooth yet bold and full bodied. Low co2 with the 13.7% AbV well tucked away.