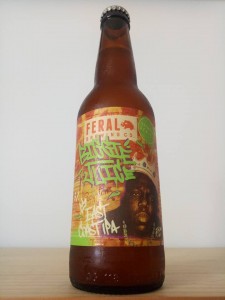 “Ok, so we’re a little awful on the rhyme front, but we did manage to hustle a Juicy West Coast v East Coast collab brew with Melbourne’s Royston Hotel. Turf wars aside – the Royston crew joined us over in the West to brew a beer teaming with punchy tropical  hop aromas full of apricot, peaches and passionfruit. Day dreamin in a cloud of haze, this IPA is intentionally cloudy contributing to a creamy mouth feel. This New England style IPA was so notoriously juicy, we decided to package it as our latest Brewpub release. Super fresh. Super limited.”

Appearance: Cloudy mustard yellow with a light orange tint. It only manages a finger of loosely held foam which peels back to a ring. Some patchy lace as it ebbs.

Aroma: Quite floral with lashings of mango, pear, rockmelon and peach. Lots of sweet orange citrus and peppery spice beginning to open up as it settles in the the glass. Very subtle vanilla cream notes in there as well. Not bad.

Flavour: Nothing really stands out to be brutally honest. Mild orange citrus tones upfront before a dry and slightly grainy middle. The hallmark brekky juice is there, albeit very subtle. A hint of spice and orange peel rolls in to a dry, creamy finish which endures.

Overall: We admit we were expecting a bit more from this. The label is as confusing as the beer – by that we mean it’s marketed as an East Coast IPA so we were naturally expecting an English style IPA where in fact it’s a NEIPA. But even as a NEIPA it isn’t up to scratch. Average.