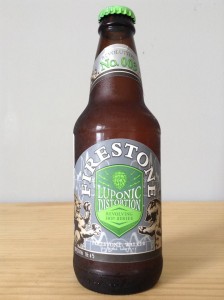 “The lead hop in Revolution 003 is a new German variety that Brewmaster Matt Brynildson first encountered in its experimental infancy while traveling through the Hallertau region during the hop harvest three years ago. “I fell in love with it then, and I’ve been following its development ever since,” he says. “It’s just loaded with this juicy mandarin orange character that is so distinctively German, unlike anything you could grow here in the states.” Luponic Distortion Revolution 003 offers a mandarin orange and ripe peach character with ample supporting notes of citrus, stone fruit and pineapple. The overall profile is round and juicy, leaning heavily on ripe fruits with minimal dank or piney edges.”

Served in an IPA glass. As usual for FW beers this IPA pours a nice and translucent golden amber hue. Just a short cap forming on top that works a wet streaky lace down the walls of the glass.
In this 3rd entry of FW’s Luponic Distortion series the head brewer experiments with a new German hop variety that is said to impart “juicy mandarin and orange” accents. We absolutely agree there, we smell freshly cut oranges, mandarin, floral pine, citrus, pineapple chunks and tropical notes. A light, doughy malt creeps in a little but essentially like every FW beer we’ve tried before this it’s just pleasant and super approachable. Solid start.
The beer holds a moderate weight in the mouth. It’s well carbonated with a composed 59 IBU. Creamy in texture and smooth in to the swallow. Classy.
Nice follow on from the nose – we get oranges, mandarin and traces of pine upfront. Really clean as it enters the mid, the crisp pine extends across and picks up the mildly assertive bitterness before it finishes on a crisp, clean and citrusy note.
Such a bang-able beer. This is why whenever we’re after clean and sessional IPA’s that don’t forego body and flavour we can never go past Firestone Walker. Great consistency, relatively low ABV (5.9%) and high drink ability. A solid all rounder here.