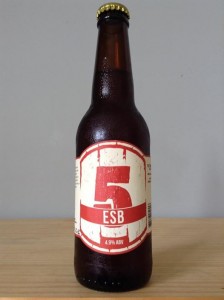 “English bitters typically fall into three varieties: Mild, Bitter and Extra Special Bitter or ESB. They all share the same affinity for malt and hops, but vary in strength and flavour. We love English style beers and thought we’d better develop a beer good enough to be served from a genuine hand pump. We don’t use conventional hop varieties for our ESB, but we reckon they play an awesome part in creating a malt forward style ale with a rounded hop flavour. Marmalade, orange and spice balanced wonderfully with a sweet toffee malt base. Best served at cellar temperature (12C) to get the most out of the English yeast we use.”

Served in an English pint. She pours a deep amber complexion with a short diminishing head. It eventually collapses to a wispy overlay with minimal lace left in its wake.
The aroma offers up hallmark caramel scents, albeit conservatively, along with an initial dusty character that thankfully disappears after a few minutes. Subtle wafts of candy, jaffa, orange citrus and nutmeg not only give the aroma a slightly unique edge but really helps to fill it all out. We had grave fears for this aroma but it has somehow pulled an ace from its sleeve.
In the mouth it’s a little thin and slippery. The Co2 is moderate as is the body. The 35 IBU develops late to add much needed life to the texture. Too watery for our liking though.
The front palate does see a nice little fusion between the sweet caramel malts and the very subtle citrusy hops but it’s short lived as the mild bitterness kicks in to gear midway. There isn’t a great deal of variation to follow as the sweet caramel malts return for the mild finish.
Yeah, not really convinced here. The sweet caramel flavours aren’t supported by a big enough body. The texture is a bit thin and the aroma had us guessing for a bit there. The foundations of the beer are here it just seems to lack the intensity and depth required to be a good ESB.