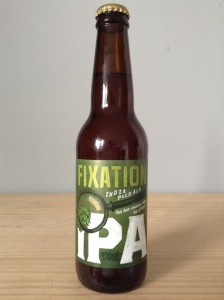 “Were obsessed with great IPA. Some would call it a fixation, and so we did. After a number of IPA sabbaticals to the West Coast of the USA, we were fascinated by how the brewers have taken this style and made it their own. They showcased just how fantastic fresh IPAs can be.”

Served in an IPA glass. The appearance offers a hazy amber complexion with a rocky but well retained two finger cap forming over the top. It laces quite well, the head weaves foamy waves down the walls of the glass as it ebbs. The aroma lives up to its West coast style really well. We get that gorgeous scent of pine resin and citrus thanks to an all-American hop bill made up of Mosaic, Simcoe, Amarillo & Citra. Layers of ruby grapefruit, mandarin, passionfruit and peach balance out with a sweet and at times biscuity malt backing. Smells nice and fresh with those fruity hops really popping. Solid start. The beer is smooth and accommodating as it rolls over the tongue. The texture is slightly dry with a gentle bitterness (65 IBU) early on which gradually intensifies after the swallow. The 6.4% ABV is well buried. Nice and approachable, nothing overly aggressive happening on the palate. The fore flavour is treated to more of the same – clean and crisp pine notes, citrus and passionfruit that washes over the tongue with ease. Maybe just a hint of malt sweetness in the middle as fresh fruits, pine and citrus carry a reasonable bitterness through to the lengthy finish. One thing is for certain here….that is that one is not enough. She’s super clean, fresh, hoppy, balanced and only a middleweight so you can knock six back without being totally legless. This IPA-only brewery is the brainchild of ex Mountain Goat genius Tom Delmont and Stone & Wood so the knowledge and experience between them is endless. We’ll be keeping our eyes firmly fixated on this exciting new brewery.