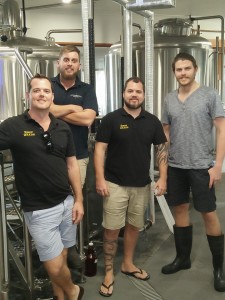 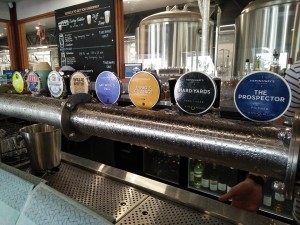 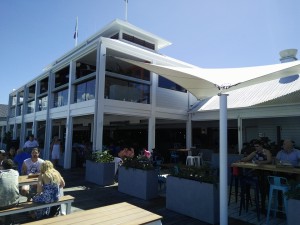 Port Douglas finally has a craft brewery to call its own. As frequent travelers to this absolutely beautiful corner of the world we were like kids at Christmas time so we couldn’t even begin to imagine how excited the locals were. Locals who have had to endure a lifetime of drinking XXXX, FNQ and Great Northern Lager. Locals who proudly call home to one of the most pristine and stunning backdrops you could ever sink a beer in. Then factor in the thousands of non locals and backpackers trekking through hoping to wrap their laughing gear around a fresh, tasty Australian craft beer. It’s safe to say that Port Douglas was crying out for a craft brewery and when owners Tony Fyfe and Craig Parsell officially opened the doors to this brand new microbrewery smack bang on the Reef Marina in late June 2016 they were shown just how keen the punters were. So much so that another batch of their ‘Prospector’ Pilsner had to be urgently brewed as the thirsty crowds had drank it dry within 2 weeks of opening. It’s a huge testimonial to head brewer, Jared Stewart, who brings a wealth of knowledge from several years honing his skills at Moa brewing in New Zealand’s famous Marlborough wine region. It’s not just his brewing skills that makes him successful, he’s a bloody legend as well as he offered to take time out of his busy schedule to take us for a tour through the brewery and a good chat over a couple of Sour’s that he had a hand in brewing and barrel aging back at Moa in 2014. His core range at Hemingway’s is small but carefully crafted to counter the extreme heat that this region sweats through for most of the year. The ‘Prospector’ Pilsner is the lightest and most sessional of the range with its sweet honeyed malt base and fruity hop accents. Problems sourcing the right hops to brew their core Pale Ale (Pitchfork Betty’s) forced Jared to brew a similar Pale Ale named ‘My Wife’s Pail’ which was fruity, slightly bitter and highly palatable. The ‘Doug’s Courage’ IPA was a low ABV (5.6%) highly sessional, bitter and hoppy ale and was probably our pick of the bunch. The last, and only dark beer in the range, is the ‘Hard Yards’ Dark Lager which is based loosely on their Pilsner and finished with nutty malts, caramel and a slight roast and much like their other beers is light and seriously drinkable. Their impressive 16-tap system is also reserved for 7 guest beers and a cider so there is a flavour for every palate possible. To pair all of this glorious amber fluid is a range of seafood, pub grub, stone fired pizza’s and slow cooked smoked meats that constantly wafts throughout the the venue making it impossible not to salivate. So if you’re planning a trip to Port Douglas be sure to drop in for a paddle, take in some of the amazing scenery, full up a growler and enjoy some fresh locally brewed craft beer while you sit around the pool and soak up some warm Queensland sun. We did….every day 🙂