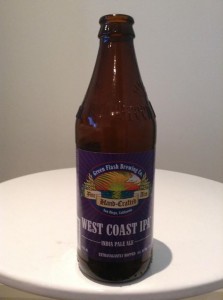 “As craft beer pioneers, we embarked on an expedition to brew the benchmark West Coast IPA. We ventured into the unknown and struck gold, discovering a tantalizing menagerie of hops. Simcoe for tropical and grapefruit zest, Columbus for hop pungency, Centennial for pine notes, Citra for citrus zest and Cascade for floral aroma are layered throughout the brewing process. West Coast IPA® exemplifies the Green Flash spirit of adventure and discovery.”

Served in to an IPA glass. The copper appearance is capped by a good two finger head which holds up stubbornly but eventually collapses to a thick, frothy halo. Laced well. The aroma certainly leans on the more traditional side of things and with an all star hop bill of Simcoe, Centennial, Columbus, Cascade and Citra what else would you expect? It’s no surprise that billowing wafts of grapefruit, citrus rind, dank resinous pine and peppery hops lead out with tropical fruits such as passion fruit, peach and lychee in support. Maybe a hint of a caramel malt backing too, just that slight pinch of honey sweetness creeping in. So good. In the mouth it’s dry and super bitter. Decent carbonation levels with medium body but it’s the big aggressive bitterness that’s got the palate by the balls. Much like the aroma the flavour also packs in big hoppy characters – grapefruit bitterness with orange peel and dank, resinous hops on the front palate. The in-your-face bitterness doesn’t budge as the dank hops carry forward through the mid and punctuates with an extremely bitter, dry and citric finish. Ooph! Most IPA lovers will froth over this but if you don’t like your beers brawny and bitter then give this palate wrecker a wide old berth. She’s aggressive, sharp and quite astringent so prepare for a hop onslaught. We’d have to admit, we loved it!