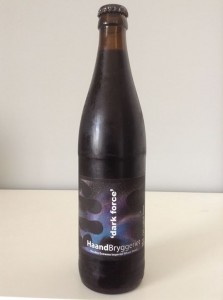 This is a real interest-arousing stout by these Norwegian brewers. We, along with a lot of other craft beer enthusiasts can most probably say that we’ve never tried an imperial wheat stout before.

Served in a beer tulip the opaque black pour produced a 1 inch brown head that slowly collapsed to a rim of foam around the edge of the glass. The aroma displays that classic Haand smoky characteristic but tweaked with additional hints of licorice, vanilla, balsamic vinegar, brine, chocolate and tart berries. The latter being something that we feel doesn’t fit with this beer. The mouthfeel is slightly thin and the body is quite mild for an imperial stout, there’s just a few things that don’t quite add up with this beer at the moment. Upfront we’re getting slightly sweet, salty and essentially cloying flavours that are expected from a light porter or a sour. Some flashes of chocolate and roasted malts in the fore-flavour and mid-palate are what saves this beer from being a pour out. The finish is sweet and salty with a hint of roasted malt, again far off what we were hoping for after cracking an imperial stout. Not very satisfying at all, even the 9% ABV is somehow not playing a role. There haven’t been many occasions where we would pan a Norwegian imperial stout but we have to say this is a poor effort. No heavy aromas of peat, chocolate or coffee, no full mouthfeel or body, too many sweet flavours and a missing booze burn. Everything we’d expect from an imperial stout are missing here. Very unsatisfying.