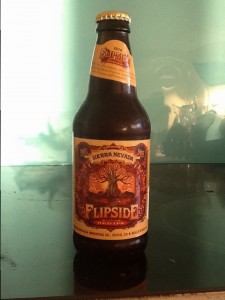 “Just when it feels like the dog days will never end, suddenly, the switch is flipped, the air gets cooler and it’s clear that autumn is on the way. Featuring a ruby-red hue, restrained malt body and abundant tropical fruit and citrus hop flavors from the use of Citra, Simcoe and Centennial hops, Flipside red IPA is the perfect beer for fall.”

This brew is the latest from such an iconic craft brewery out of the states. Has a very subdued nose despite the bold statements on the back of the bottle..” This red. IPA is a rebuttal to mild mannered beers…”. Can get some fruit hops. We have had pale ales with more nose though , especially when using citra and simcoe hops. There is a deep amber hue to the body with definately carbonation in the mouth. Little head and mild lacing on the glass. We definately get the bitterness of the hops but we are slightly disappointed at the mildness of the hops. We thought this beer’s flavours were “robust”. Far from it. It is definately a smooth IPA though. We get mild tropical fruit but very little pine. Sitting at 6.2% alc vol, it’s a standard yet mild IPA , and we think that there are better brews from this fabulous brewery. Not bad, not wonderful. Average IPA.