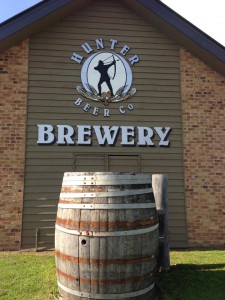 It’s no longer a secret that 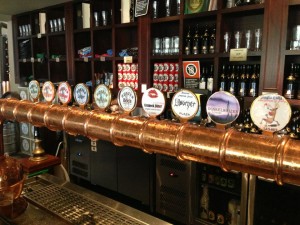 wherever you find good wine you’ll find even better beer. It couldn’t be any more true than the Hunter Valley region which now boasts four craft beer breweries along with a swathe of Australia’s best known wineries. Hunter Beer Co (more commonly known as Potter’s Hotel) is as rich in history as the magnificent clay-laced soil around the valley, and you will notice it instantly as you drive in where two heritage listed brick kilns still stand from when the property was used to produce terracotta pots way back in the late 1920’s. Another great thing about this brewpub is it’s sheer size. Along with offering resort-style rooms, the establishment is split in to two wings with a kitchen, eating area and standard pub-style bar on one side and on the other is the brewery, with the tanks on show at the back of the room, a bar with a 10-tap system and a large rustic farmhouse table and stools made out of quality timber in the middle of the room. It doesn’t end there either, in between the two wings is an outdoor eating area with a pool table which opens up to the absolutely huge grass area out the back where they have a massive play area for the kids along with a temporary jumping castle. This place has it all….literally. Their standard range of beers include a Kolsch, Witbier, Ginger beer, Lager, Pale Ale and a Bock. All very good beers in their own right but the stand outs are definitely the Pale Ale and the Bock with the Kolsch running in a tight 3rd. Another really good feature is the brewers’ extensive range of seasonal’s, the day we were there they had the Cessnock Bitter which was a traditional take on the British ESB, the Usurper – a heavy, rich and decadent Russian Imperial Stout (which was bloody delicious), a Dunkelweizen which was also quite tasty and the Jingle Balls Christmas ale – easily the best beer of the afternoon with its rich malty base, caramelized toffee, rum and subtle coconut notes, it was a remarkable drop. We can only hope they bottle this one day. Very impressed with the overall atmosphere, quality of beer and service. The food was good without being great but hey, who comes for the food when there’s so much good booze to be drunk!? Luckily our Misses’ love their wine. Suits us to a tee as we can certainly see a bi-annual trip to the Hunter to immerse ourselves in the beautiful scenery, wineries, restaurants and breweries. A big thumbs up from us.