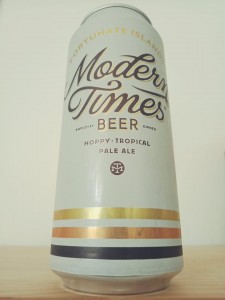 “Fortunate Islands combines the bangin’ hop aroma of an über-tropical IPA with the crisp, deeply quenching drinkability of a killer pale ale. We achieve this magical result by starting with a mild, nutty malt backbone, then dry-hopping the bejesus out of it with Citra and Amarillo hops. Restrained bitterness and vibrant notes of mango, tangerine, and passionfruit combine to form a sessionable crusher of mind-bending proportions. It tastes like wizards.”

Appearance: Nice and bright golden amber with a very mild haze. It holds a thumb of tightly beaded foam which retains and works a healthy lace down the glass.

Aroma: Super tropical. Tonnes of mango, lychee, pineapple, orange citrus, stonefruits, passion fruit and a touch of boiled candy. The malt profile actually plays a big role in the aroma…hinting at grain husks and raw almonds. Maybe even a slight bready note, no doubt due to the base wheat malts?? Very tidy.

Flavour: Those wheat malts we just mentioned in the aroma play an even bigger role on the palate. It’s got that dry and grainy aspect but with a certain zing that we find so synonymous with wheat beers. There’s also an accentuation on grapefruit and orange citrus…especially through the to the dry finish. Again dry and husky as it draws out.

Mouthfeel: Light on, creamy, not going to say chewy but it’s certainly got a gelatinous texture happening. Moderate IBU (40) and AbV (5%).

Overall: It’s an interesting one because we’re not really fans of wheat beer but as it’s only 60% wheat and spruced up with Citra and Amarillo hops it’s actually not a bad drop. They’ve struck a nice balance here.