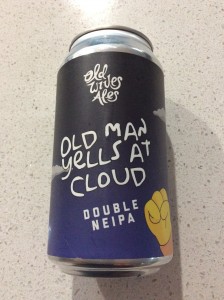 Glassware: Poured into a schooner glass.

Appearance: Beautiful Orange Juice turbidity. A sudsy 10mm off-white head recedes moderately quickly leaving just a rim of lacing. Now this looks like a ‘NEIPA’. Not a hazy look, and no obvious evidence of carbonation. As we drink there is very mild/if anything lacing down the glass…basically it just slides down like its oily.

Flavour: Virtually mimicking the aroma. Possibly a hit of green mango in there? Light on the booze which is a credit to the Brewers, being an imperial. Just a big boozy (restrained) fruit bomb. Touch of creaminess also.

Mouthfeel: Unbelievably smooth and balanced for 9% Alc vol. Despite the fruits being used the bitterness is so contained. Mouthfeel is moderate to full with great pithy aftertaste but it’s not that grapefruit bitterness. It’s sweeter and spicier. It’s dense like a proper double NEIPA should be, and we can think of only a few Australian double NEIPA’s that match this currently on the market.

Overall: Top Shelf. Has all the qualities of this type of brew. It’s thick as thieves but surprisingly drinkable, tastes like you could it for breakfast (that would be interesting), and undeniably smooth and balanced. We had some cracking double NEIPA’s in the USA last year and this would be not that far off them. A leader of the pack of this style that’s for sure. Kudos.