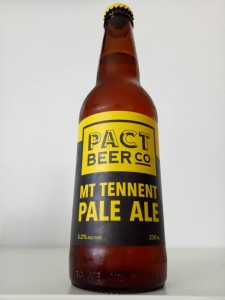 “Inspired by the picturesque mountain and the legend of its bushranger namesake, the Mount Tennent Pale Ale walks the tightrope of accessible, sessionable and mindblowing all at once. Legend has it that John Tennent’s treasure is still buried at Mount Tennent, ACT. Many have tried to find it, but none have succeeded. Never mind… now you can find a little bit of Tennent’s treasure in every sip.”

Served in a shaker. Slightly hazy amber appearance with a fair bit of suspended sediment floating around. A short head forms but recedes to a film which works a healthy lace as it subsides.
The nose is nice and punchy with lifted citrus and pine resins. Also getting heady notes of orange peel, pineapple, mandarin and passion fruit with a delicate stonefruit accent – mango and rockmelon. Certainly more of a biscuity malt character with a subtle pinch of spice tying it all together. Superb aroma, very IPA-esque.
The flavour comes on strong with zesty citrus, pine resin and a semi sweet biscuit malt base. Detecting a light spicy note in here, at times a little herbal in its delivery. Hints of grapefruit and orange peel develop late in the mid and deliver a dry and crisp finish with good length.
The texture is fresh and snappy with a vibrant co2. Mild-moderate body. Slightly raised ABV of 5.2% which adds a bit more oomph.
Highly enjoyable pale ale here. We must have got this fresh off the bottling line as it is super crisp, punchy and flavoursome. Totally poundable, definitely a return-to beer especially now that summer is just around the corner and the weather is warming up. Solid offering.