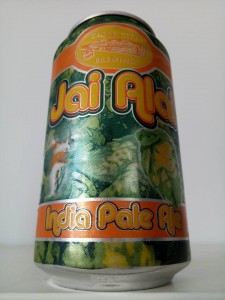 “Jai Alai, a game native to the Basque region of Spain, is played on a court called a fronton. Jai Alai players attempt to catch a ball using a curved mitt whilst the ball travels at speeds up to 188mph! Proving they have a sense of humor the Spanish dubbed this game, with its ball traveling at racecar speeds, “the merry game.” Tampa was once home to a bustling Jai Alai fronton but sadly all that remains of Jai Alai in the Tampa Bay area is this India Pale Ale that we brew in tribute to the merry game. The India Pale Ale style of beer has its roots in the ales sent from England to thirsty British troops in India during the 18th century.”

Served in an IPA glass. Amber to orange in colour with a thumb of extremely well retained head perched on top. Superb lace decoration clinging to the glass as we imbibe.
The aroma is oh-so-American. Gushing with candied orange, tangerine, lemon drops, lavender, pine, cannabis and a subtle bready malt structure at the base. We just love these traditional American IPA’s as they take us back to the glory days back before your NEIPA’s and monolithic triples and quads. Just a good and honest IPA aroma.
Neat transition on to the palate. There’s a big impression of candied citrus, pine resins, ruby grapefruit and herbal/grassy hop that stretches well in to the mid, picking up tropical fruit and earthy floral notes in the process. The back end anchors on the grassy/resinous hop characters with a long and dry finish.
She holds a nice moderate body with a creamy and somewhat effervescent texture. The 70 IBU forms late and the 7.5% ABV is dangerously well concealed, kind of creeps up on you.
Brilliant IPA. One of those beers that evokes old memories from just one whiff. It’s IPA’s like this that made the style a symbol of a revolution the world over. Kudos Cigar City this is an excellent drop.