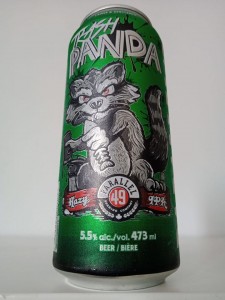 “The urban trash panda will spend most of its life scouring garbage bins for the dankest, juiciest hops that the Northwest coast can offer. Don’t be fooled by this bandit’s cute little mask – this snarling vermin won’t leave any can unturned.”

Appearance: Hazy burnished orange with a thumb of sturdy white foam rested atop. The head is retained well and leaves a smattering of lace in its wake.

Aroma: A bit of a citrus bomb – yellow grapefruit, orange (and rind), lemon/lime, some pretty dank piney notes leading out as well. Theres something quite old world about it…offering a strong floral bouquet, dank herbals and earthy/grassy accents like a good English IPA would. Subtle hints of melon and stonefruits also getting a look in. Good depth here.

Flavour: Somewhat similar to the nose: clean piney notes, minty herbals, orange peel, tangerine, weedy resins and apple/pear. The latter holding up the most through the mid with that orange peel pithy-ness building in to a dry piney/grassy finish which endures quite nicely on the back end.

Mouthfeel: Pretty inoffensive for the style – soft and smooth. The mild ABV (5.5%) probably adds to the approachability. Medium body and Co2.

Overall: We honestly weren’t too sure what to expect here. An unknown Canadian brewery with an early 90’s style rock band cover as the graphic it could have gone either way. In the end and funnily enough it’s a bit middle of the road…nothing exciting but not too bad either.