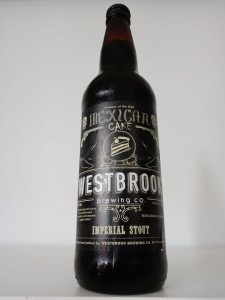 “Way back in December 2011, we brewed our first anniversary beer – a serious imperial stout aged on cocoa nibs, vanilla beans, cinnamon sticks, and fresh habanero peppers. It was so delicious we decided to bring it back once each year.”

Appearance: Pitch black with a thumb of dark brown foam resting atop. Slow and steady reduction…forming a collar with spotty lace trailing it down.

Aroma: Very intriguing – we can certainly pick up the spicy accents – mostly peppers with delicate touches of cinnamon, star anise and vanilla. It’s unique in the way that it doesn’t seem heavy at all – there’s minimal char and deep roast, mild dark chocolate and coffee aromas. The only dominant stout characters are the cacao, milk chocolate mousse, subtle licorice and carob. Then spice and peppers really opening up as it settles.

Flavour: Again, really hiding the heaviness of the style well. It drinks more like a big and boozy dark ale if anything. The spicy notes do a lot of the talking – the habanero peppers muscle up against the delicate cinnamon, vanilla and nutmeg. Cacao and mild dark chocolate feature nicely before it rounds off on a warm peppery finish with a dry roasty undertone.

Mouthfeel: Light on and inoffensive – apart from the lingering burn of the habanero peppers. Very uncharacteristic of the style… considering the weight (10.5% ABV).

Overall: This is our 2nd entry for Westbrook and they have gone over and above what we were anticipating. This is impressive not only from a non barrel aged perspective but how they’ve managed to keep it so light and approachable. Lovely drop