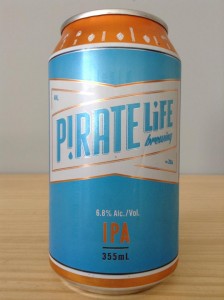 “Up until now if you wanted to step up from our Pale Ale you would have to reach for a trusty tall boy of our IIPA. While we would baulk at the suggestion that this is ever a bad thing, there are times where one wants to drink at least four beers without feeling like they have just gone round for round with Boony on a plane trip back from London. So we are happy to announce we have finally bridged the ABV gap with the release of our fourth core range beer: The Pirate Life IPA”

Served in an IPA glass. The pour offers a hazy orange/amber glow with a shade of soft crimson in the centre. A healthy two finger head forms on top but it steadily recedes and establishes a thin sheet with some patchy decals left on the glass. The nose is pretty well balanced. There’s a hefty malt backing that provides plenty of sweet bready/biscuity notes and subtle hints of chewy caramel that sit tightly under the dank and slightly resinous hops. We get a suggestion of citrus and tropical fruits poking through but the dominant scent seems to be this leafy, almost spicy raw hop aroma. A little restrained but it’s essentially nice and approachable. In the mouth the texture is dry with quite an assertive bitterness from beginning to end. The feel is nice and full with a spritzy Co2 level. Medium in body. The front palate is given a decent dose of hop bitterness along with lashings of citrus and pine. The aggressive hops are pulled back as a wave of sweet malts washes over the mid, leading in to a dry, grassy finish with hints of grain husks on the back end. We absolutely love what these guys have been doing, their first three releases (IIPA, Pale Ale & Throwback IPA) were nothing short of brilliant. The last couple though, haven’t been up to that standard. The NZ Pale Ale and this IPA just seem to lack that pizzazz that the first three possess. To be fair it is extremely hard to better a 10/10 beer! Certainly an enjoyable IPA, but not their best.