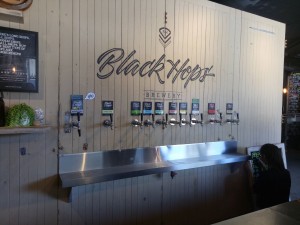 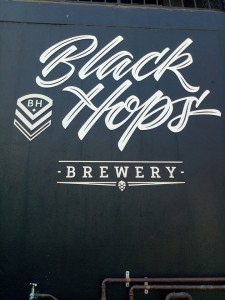 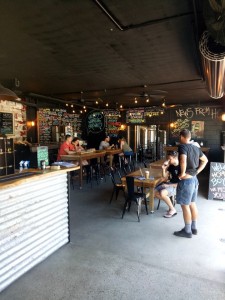 It was something that was gnawing at us for weeks but we thought we’d wait until we met the team at Black Hops to ask. We wanted to know whether the name was a clever play on words (Black Hops – Black Ops, roughly meaning a covert military operation). And for once, we were right! The funny thing is though, these 3 mates (who are all ex-military) run the brewery with the objective of being the least covert operation imaginable. Their concept is pretty basic, and that is to be “open book” – so things like recipes (well, almost the whole recipe) for their beers and where they source ingredients are all open to the public.

10 taps are on offer although on the day one had blown and we weren’t too keen on the ginger cider but that worked out well anyway as paddles have 4 tasters each. We went for the 30 Cal – a surprisingly full flavoured mid strength, the Lay Day Lager, Beach house Farmhouse Ale and the Pink Mist – a light and refreshing raspberry flavoured saison. The 2nd paddle went like this: the much coveted Pale Ale and then the three seasonals – the Amaretto Sour, the Caribbean Crusher (a rum infused IPA which was the pick of the bunch for us) and the Egg Nog Stout.

It sounds cliche but we really didn’t want to leave, it just has that super laid back atmosphere, friendly staff (shout out to Ally the barmaid – she was informative and very entertaining). But all good things must come to an end so we’re off to the next brewery!