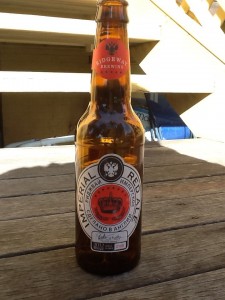 “Although Red Ale is not really one of the traditionally English styles they do exist and are typically 3.8% – 4.8% abv, red coloured from crystal malt in combination with pale ale malt, well attenuated so sometimes a bit harsh and frankly a bit on the dull and boring side. If ever there was a style crying out to be given some guts this is it and Imperial Red Ale is the way to do it.”

This brewery is situated in South Stoke, England, and it follows in the footsteps of other imperial-style beers. Our first crack at their range. Pouring a deep glowing amber, this brew has all the characteristics of English style beers. The rich caramel nose from the caramalt is evident, and the use of amber malt showcases the deep appearance and the bready sweetness well. There is very little head here, and mild carbonation in the glass and mouth. The thing we like about this pommy drop is that for a 10% ABV ale, it’s really quite smooth. The bitterness blends in nicely to mask the booze burn on the throat. There is a very mild peppery spice on the back palate, likely from certain hop varieties used. The brewers describe this beer as having a ” savage English bitterness”, but we don’t wholeheartedly agree. It’s far from it, given the smoothness of the brew. Recommended to be served at room temperature to cool in a wine glass. We really dig this beer. Basically, it’s a well balanced (for its strength), imperial red ale.