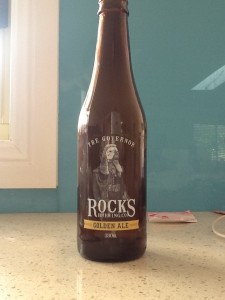 “Named after several early governors who promoted the advancement of beer brewing in the early colony of Sydney. From Governor Bligh and the infamous mutiny off HMS Bounty and his controversial resignation as the NSW Governor after the Rum Rebellion, to Governor Phillip King who was prompted by Lord Hobart to import brewing materials to try and stem the rum currency in the early colony. Even before the first Governors could restrict the future drinking culture of the young colony, Captain Cook was already brewing beer on his way to the new country on board the Endeavour in 1770. Beer was always destined to be the drink of choice for the Australian people.”

Served in a shaker glass. Slightly hazy appearance with a short short white cap that peels off to a fine layer over the top. Laced well despite the quickly diminishing head though. A lovely fusion between Australian hops (topaz and galaxy) and American (Mosaic) lends this aroma a delicate yet lovely fruit-driven nose. A good splash of passion fruit, rockmelon, mango and apricot are hinged nicely on the back of sweet, bready malts. Clean and simple aroma, very uncomplicated. Already a perfect summer session beer. In the mouth it’s smooth with a nice weight behind it, some golden ales are too thin and watery but this one has a good grip on the back and some tingling bitterness on the front of the tongue. The flavour profile is very similar to the aroma. We get a really clean blend of stone fruits and sweet, bready malts with a gentle bitterness cutting through. Flavours remain unchanged as it leads through the mid and on to a crisp, dry finish with reasonable length. Only 4.5% ABV so this beer has held itself together quite well. Look, normally we don’t really talk lighter beers up but this one has surprised us. Aromatic, well bodied and tasty with a good, crisp finish. A super session beer. Good drop.