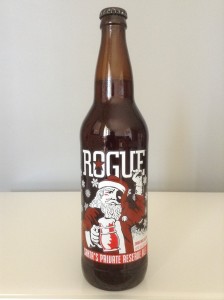 “Rogue’s annual holiday offering, Santa’s Private Reserve, is a variation of the classic Saint Rogue Red, but with double the hops–including Hops and Barley grown and harvested at Rogue Farms”.

Another annual holiday ale from the man with the famous ‘Pacman’ yeast. For those who don’t know yet, the pacman strain this brewer uses derives from the beard of the head brewer himself. What a thought to process just before taking a swig huh? Wen served in to a beer tulip, the amber/copper pour whips up a creamy two and a half finger head that retains well drawing out some soapy lacing that clings to the walls of the glass. The aroma doesn’t possess much..it’s mainly driven by bready malts with hints of grain, nuts, berries, raisin and toffee/caramel undertones. In the mouth it’s quite light on with medium carbonation and body. Assertive hops upfront are well balanced by the presence of Munich malts, toast and caramel. The mid slightly drops off but it’s picked up by suggestions of pine and spruce that linger well on the back palate, displaying good length. 6% ABV. Not as spicey as most Christmas beers, although in it’s defence it is a well revved up amber ale. We thought spices such as clove and nutmeg would go down really well with this, but still, not a bad beer.