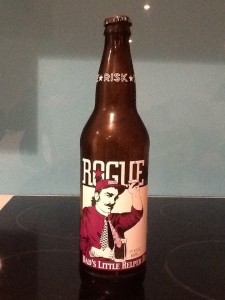 “DEDICATED TO DADS. After the death of his wife, Henry Jackson Smart was left to raise his 6 young children alone. His courage, love, selflessness and dedication inspired his daughter, Sonora Smart Dodd, to organize the first Father’s Day on June 19th, 1910. In 1924 President Calvin Coolidge proclaimed the third Sunday in June as Father’s Day. President Nixon, in 1972, established it as a permanent day of national observance”

From the brewery which the head brewer uses his own pacman beard yeast for brewing..marvellous. This is a black IPA . Pours a dark brown/black with a big head which leaves a foamy residue on the glass. It’s an interesting aroma this ..full of roasted flavour, mild biscuit and some ash. The flavour backs this up well. The bitterness of the hops is mixed well with the malts used. Good mouthfeel.. Has depth. There is the sweetness from the Munich and crystal wheat, there is the malt from the 2row. We love the 6.8% alc vol as it makes this brew really balanced. There is no overbearing bitterness despite having an IBU of 92. We love the story of this beer, being dad’s little helper – a daughter’s ode to her father which eventually led president Calvin Coolidge to proclaim Father’s Day. Nice beer, but there are better black IPA’s on the market.