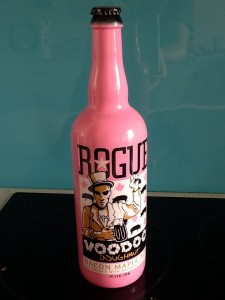 “Rogue Ales has collided with Voodoo Doughnut to create Bacon Maple Ale! This unique artisan creation contains a baker’s dozen number of ingredients including bacon and maple syrup from one of Voodoo’s signature doughnuts”.

Wow..crazy beer. Love the pink bottle. First whiffs emanate smokey meats with the sweetness of the maple. Pours almost like an IPA with that deep copper hue and a big frothy head which fades off. On the palate, there is the smoked malt and from observation of the bottle, there are 3 types used in the brewing. Not sure about the doughnut aspect of the beer but there is definately that sweet, savoury mix going on. Bacon is actually used in the brew and the smoky flavours, combined with the selected malts and pure maple is a great mix. Lots of lacing on the glass as we push this puppy down. Of note also is the famous pacman yeast.. The head brewers beard yeast. There is also a mild hop/bitterness thrown in amongst the other flavours. Sitting at 5.6% , this beer as an experimental is a cracker. The flavour profile is balanced superbly. This beer is really expensive ($32) but as a craft lover, who cares. Just drink it..it’s a special drop.