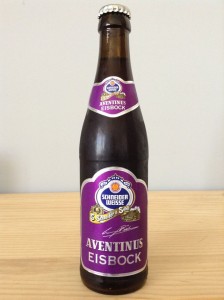 “Up until the 1940’s, Aventinus was shipped all over Bavaria in containers lacking temperature control. Consequently, the precious drink partially froze during transportation. Unaware that the brew was concentrated by the separation of water from the liquid. People were baffled by this unique version of Aventinus. By chance, the first Aventinus Eisbock was created. Well aware of this story, Hans Peter Drexler, brewmaster of the Schneider brewery, decided to recreate this classic “mistake” in a modern controlled facility. Thus, the Aventinus Eisbock is reborn sixty years later … Prost!”

Served in a wide rimmed tulip. This elegant looking drop pours an attractive light mahogany hue with dark copper edges. It’s topped with a fine wispy head that doesn’t waste time as it reduces to a bubbling island in the middle. Laced poorly. The sheer depth and complexity on the nose is incredible. It has lots of similarities to a Belgian Quadrupel with its big impression on rich fruit cake, banana bread, toffee, stewed plums, clove, figs/prunes, alcohol and an earthy truffle-like character. Once it warms the boozy aspect intensifies imparting in-your-face wafts of rum and brandy. Superb! It’s like a Dubbel, Tripel, Quadrupel and Weizenbock were all blended to create some kind of new super strong beer. Simply brilliant. In the mouth it’s uber smooth. Beers that weigh in at 12% ABV shouldn’t be allowed to be this smooth! It’s dangerous! The creamy texture, low Co2, plump body and pure decadence demands this be slowly sipped to really bask in the complexity it has to offer. Our palates are scrambling trying to isolate the inundation of flavour. Everything from port, raisin, clove, brandy and banana to toffee, straight alcohol, molasses and even a kind of syrupy muscat-like flavour that is impossible to explain. This beer is that rich and heavy that it could easily be subbed for an aperitif or cognac. It is absolutely amazing how complex and multilayered it is. Words just won’t do it justice…..If you see it on the shelf don’t think twice just bag it. Phenomenal stuff.