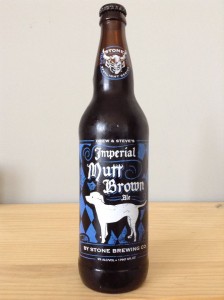 “Stone brewers Drew Neldon and Steve Via won this year’s annual in-house Stone Spotlight Series brewing competition with this hefty brown ale—an impressive result considering that one of them had never encountered a brown ale he liked before tasting this one. Given layers of flavor from Vienna, Victory and Chocolate Wheat malts, and warming, refined sweetness from Honey Malt and turbinado sugar, it’s a rich and soothing beer brewed with respect to traditional English methods and New World innovation. The British-American bulldog of the craft beer world? Perhaps. Best in Show? Absolutely.”

Served in an English pint. This bad boy pours to a dark brown complexion with a fluffy two finger head forming on top. The thick tan head maintains most of its height, only peeling off a smidge as it discards a healthy set of rings down the walls of the glass. In true Stone fashion they’ve hopped the bejesus out of it. To their credit, as usual, they’ve done it impeccably. No sooner do the rich chocolate malts come through do the bitter and earthy hops to balance it out. Again, just as that roasty, nutty note advances this very delicate fruity hop character pulls it back. In support are toasty malts, dark fruits, vanilla and a somewhat burned toffee note to fill it out. Impressive. The beer holds a good weight in the mouth. Full bodied and creamy in texture but remarkably effortless in the swallow. The 9% ABV is masked really well, Co2 is mild and the 45 IBU provides a cheeky dryness in the tail. Plenty of malt forward chocolate, cocoa and roast on the front palate. A mild bitterness takes shape as fruity hops and bready malts battle it out across the mid. For a moment the malts take the lead just before an assertive bitterness rounds out and provides an incredible balance between the roasted malt and grassy hops on the rear palate. In summary we’d have to agree with the brewers. She’s a total mutt – a complete cross between hops and malts but damn they’ve done it well. If it were a dog it would probably be called a bullstaff. Half British bulldog and half American staffy. Solid and robust yet soft and sweet.