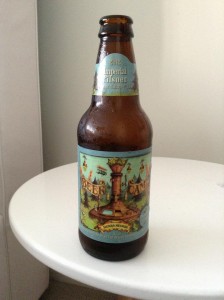 “Produced especially for the OBF, Beer Camp’s golden color and medium bodied sweetness comes from pale, Europils, Munich and acidulated malts. Magnum, Crystal and Pacifica hops provide a distinctly American bittering and hop flavor profile without going over the top. The result is a refreshing, balanced, crisp pilsner, easy to drink on a hot summer festival day – or to take with you to beer camp.”

Another good edition to the beer camp repertoire from these world class American brewers. Although it’s stated as an ‘imperial’ pilsner the 5.6% ABV doesn’t really reflect that as an imperial beer normally requires an ABV higher than 7%. Anywho, we served this in a flute glass, the slightly hazy straw-gold appearance whips up a compacted white head that holds fast but eventually reduced to a fine covering on top. Reasonable lacing. Off the nose we get light citrusy hops, grains, bready malts and a hint of herbs. In the mouth it feels smooth as silk with a slightly dry texture. Moderately carbonated with medium body. Initiating the palate are some light grassy/herbal hops that flow into mild doughy/bready malts through the mid. A hint of honey sweetness develops late  and leads to a light bitter finish with a hint of dryness on the back end. Length was OK. This pilsner is clean, crisp and highly sessionable. Maybe a very faint hint of warmth from the 5.6 % ABV but hardly discernible. All in all not a bad beer,anything by the Sierra Nevada boys is good so it’s no surprise.