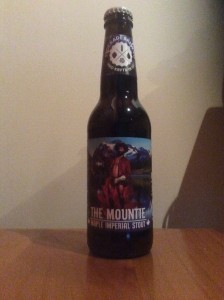 The Mountie is a BIG jet black beer which delivers rich stout flavours including chocolate, raisins, and a roasty finish. In addition we have added a heap of maple syrup bringing out a nutty, sweet character.

We tried this at the end of our session of GABS and we were impressed by the maple flavour. Be nice to try this with a fresh palate. Poured into a snifter glass we see a mat black with minimal head here. Just a clump of bubble here and there, with a ring of off white around the rim. Aroma is as we remembered. So much maple syrup. It’s like your having pancakes. Crazy strong aroma. First sip delivers such an abundance of maple syrup that it’s initially hard to taste anything else. We get that nuttiness from the maple, and a decent amount of toffee. We get a heap of booze burn with a good swish around the mouth, and an oiliness that clings to the lips and coats the mouth. We note a 12% Alc vol and think that the rest of this beer is going to be like eating steak. It’s interesting because half way through this drop, the maple blends in and your left with those imperial stout flavours of roast, ash, booze, some chocolate, and espresso. This drop almost has liquorice hit. Did we mention it was oily?! Mouthfeel is full bodied and great length of flavour. Carbonation is low as expected. No lacing on the glass. We get a touch of vanilla as we move this tsunami of flavour. Geez this is a strong drop. Feeling it on the brow. We love the maple. We love the toffee. We get the nuttiness. We think this bad boy could almost be aged and the flavours of the raisin, brown sugars, maple sweetness, toffee and spice would be mind blowing. Either way, it’s an impressive imperial stout.