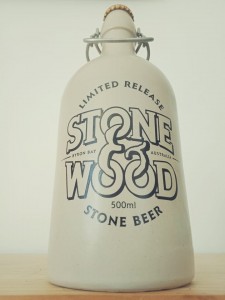 “In May 2017, we squirrelled some of our Stone Beer into a handful of whiskey  & port barrels to age…After 12 months of soaking up the woody goodness, our team have pulled the corks on the barrels and filled our signature Stone & Wood ceramic crocks as well as a few sneaky kegs to ship to a handful of lucky venues.”

Appearance: Dense black with a sturdy thumb of tan foam resting on top. It retreats to the rim and leaves a cascading lace down the glass.

Aroma: Not as vigorous as we’d hoped but still plenty of character. Lightly charred malts, mild smoky notes, chocolate, toasted nuts, cherry, tobacco, licorice, treacle and a subtle dash of vanilla sweetness to pull it all in to line. We already love the stone beer but the barrel aging has handed it more of a sweet and smoky character which is sensational!

Flavour: Much like the aroma in the sense that it doesn’t really come on with much ferocity but it still manages a swathe of flavour…mostly charred and toasty backed up by warming notes of whisky and booze. Some bitterness getting amongst it – coffee and ash – leading in to a dry and roasty finish.

Mouthfeel: Rather light on for a barrel aged porter. Co2 is lifted and it conjures up a little bitterness from somewhere. 8.8% AbV showing through at times. Bit of a mixed bag really.

Overall: Although it seemed to lack intensity at times there is more than enough here to sink our teeth in to. We’ve gotta pay homage to this awesome ceramic crock too…this is going to slot in nicely on our honours shelf.