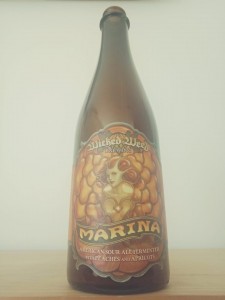 “The daughter of a poor, ailing farmer, Marina was wrought with the burden of responsibility. Her father had done his best to raise her with all the love and lessons befitting a princess. Time passed and with it her father. Her worry for the land deepened and dominated her every thought. One night, Marina found a letter scribbled in her father’s hand: “Do not fear; you are the daughter of the king, sister to Medora, raised outside the kingdom to keep you safe when war was upon us.” Marina, unburdened and full of rejoicing, returned home to her sister, and it was said of them, never did such just and loving rulers watch over the people.”

Appearance: Somewhat hazy pale golden hue with a loose wispy overlay. Seeing some wet and streaky lace clinging to the glass as it ebbs.

Aroma: The earthy apricots really lift out of the glass…as do the peaches. Smells bloody magnificent! Some extreme funk going on – strong lacto acidity and a lot of manky cheese and barnyard character as well. Just a hint of the white wine barrels peeking through bringing sour white grapes, vinous fruits and oak along with it. Brilliant!

Mouthfeel: Quite a spritzy texture to it. Medium-high co2 and light-moderate body. The pucker is pretty full on initially but it does mellow out so it scores a modest 3.5/5.

Overall: We’ve been loving the influx of Wicked Weed beers recently. Although they sold out a long time ago we’re still massive fans of what they’re putting out. This one included!