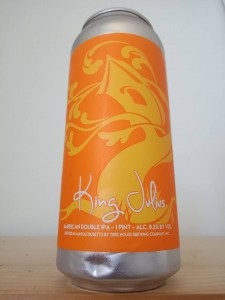 “King Julius is an American Double IPA brewed to be an exceptionally flavorful, juicy, and hop saturated beer without rough edges or abrasiveness. Its vivid citrus aromas give way to flavors of orange creamsicle, mango smoothie, and a bounty of fresh tropical fruit. We find it to be refined and delicate amid an onslaught of flavor. Originally brewed in 2012, King Julius is our endeavor to marry our past with what we aspire to be in the future.”

Appearance: Cloudy orange complexion. The head swells to two fingers and holds its shape really well. Healthy lace work clings to the glass as it ebbs.

Aroma: Super fruity, tropical and laden with pureed mango, melon, pineapple, paw paw and apricot. Kind of has the breakfast juice thing going on but not as much as previous TH IPA’s. King Julius definitely displays a heady orange tang, kiwifruit, some herbal characters and a soft creamy oat-like malt profile. Maybe just a hint of peach skins too. Very nice!

Flavour: Follows on from the nose with its pronounced juicy notes of orange, melon, paw paw and apricot. Detecting a bit of warmth from the booze (8.2%) but it’s subtle and compliments the stonefruit notes rather well. The middle takes on a more citrus-forward role, adding to the slightly assertive bitterness which rolls in to the dry, resinous and pithy finish.

Mouthfeel: Smooth and creamy initially then developing a snappy bitterness in the swallow. Co2 is spot on – detecting a very mild sparkle to it. Medium body.