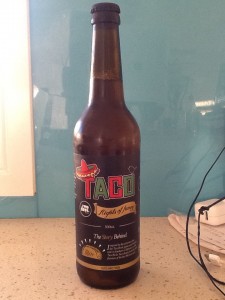 “{Two Birds Taco is brewed using ale and wheat malts, with an addition of flaked corn. Citra and Amarillo hops contribute citrus and fruity characters, which complement the additions of coriander leaf and fresh lime peel. The beer pours a hazy shade of pale and we use a clean, ale yeast to allow the fresh flavours to shine. 5.2% ABV, 28 IBU”.

An interesting concept this one. From the two chicks at two birds comes this wheat ale that’s brewed with the addition of corn, lime peel and coriander. Sounds delightful but is it a hype?!?

Pouring a straw/gold with plenty of bubble, it looks like a cloudy pale ale. Initial nose is that of floral hops, citrus peel, grainy wheat malts and a suggestion of lime juice. Certainly if you think hard enough, there is corn there on the palate but more cereally like corn flakes. The herb-like nature of the hops is probably driving the coriander character harder than the addition of actual coriander. There is an extremely mild peppery end palate which is the jalapeño addition. This brew sits at 5.2%.

All in all, the mouth feel is a tad watery, but we feel that it’s a decent crack at a taco. We think that all the elements are there as what was described, but it was just missing the knock out punch. Maybe it needed more chilli spice at the end? Maybe add some avocado? Anyways, we can’t bag it too hard, it was a tasty beer.