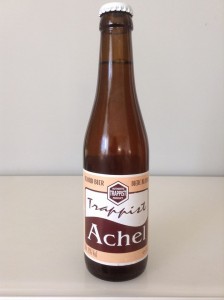 This is our first entry for this Trappist brewery. We have somewhat embarked on a mission to try (and hopefully) review not only beers from all eleven Trappist breweries but every Trappist beer from these eleven breweries. It may be quite a feat, and our livers may not be too fond of the idea but we will get there. Eventually.

From the bottle and in to a snifter she goes. The golden appearance is presented with a slight haze and good levels of active carbonation that stream up to form this pillowy 2 finger cap. The head is retained well, only peeling off about 5mm with a sheet of lacing that wraps around the top of the glass. Looks good. We’re getting those prominent Saaz hop and Belgian yeast aromas initially. Wafts of fresh pear/apple, light citrus, stone fruits, banana, honey, clove and coriander are hinged on a good base of biscuity pilsner malts. In the mouth it’s quite highly carbonated which provides this frothy texture. Quite light on but this spritzy carbonation offers a little grip on its way down. We’re getting quite a pronounced sugar-like sweetness in flavour which we weren’t getting off the nose. It’s not distasteful in any sense and if anything the spicy hops and mild bitterness does cut through it well. After a few more sips the sugary sweetness takes on more of a honey flavour and as it warms further it morphs into stewed fruits. It’s somewhere around the mid-palate where the 8% ABV begins to open up as those fleshy undertones of pear and a suggestion of herbs carry forward on to a yeasty/fruity finish with a lingering note of banana and clove to the back end. Certainly a versatile beer, it’s one you could knock back chilled in summer or one you could let rest for 10 or 15 minutes before consuming. Nothing you will hear us rave on about but a decent drop all the same.