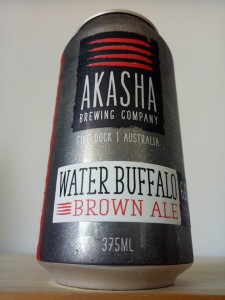 “The Water Buffalo is an American style brown ale displaying a dark brown hue and off-white head. The deep caramel, toast and chocolate flavours are balanced perfectly by the fresh citrus and pine character from the classic American hops.”

Appearance: Chestnut colour with a thumb of loosely packed tan foam sealing it off. It peels back to a halo which posts a set of rings as it ebbs.

Aroma: Lots of black IPA qualities on the nose. It’s marketed as an American brown ale and with Akasha’s love of everything USA we aren’t surprised. Roasted malt, coffee, earthy and bitter chocolate meets subtle pine, citrus and grassy/herbaceous hops. It’s a match made in heaven.

Flavour: Absolutely delicious. Subtle hop characters initially but they’re instantly enveloped by a dark roasty malt which offers coffee, bitter chocolate and treacle. But just as we say that a mild citric bitterness cuts through with a hint of orange peel but again it’s seized by those dark roasted malts that finish dry and toasty with subtle hop bitterness in the tail.

Mouthfeel: It holds a nice weight but the lifted co2 gives it a lighter feel than it probably deserves. Well hidden 6.6% ABV and a tempered 60 IBU.

Overall: Brown ale eh?! That is a black IPA through and through! That is all. Other than that it’s a bloody solid drop.